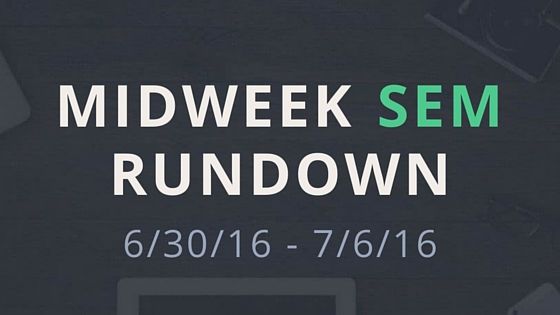 Major search volatility indicates a Google algorithm update.
During the month of June webmasters noticed large ranking movements, which may indicate that there was a major algorithm update. The update appears to have been associated with content quality. While it may have not been directly tied to Panda, sites with too many ads rather than content, thin or generic content and indexing issues were hit. This was not the Penguin we have all been waiting for, but it still had a large impact. Run through your keyword rankings, especially for terms where your content is weak.

Angie’s List removes its membership fee.
Angie’s list has removed the $40/year membership fee and made reviews accessible to everyone. It does however, require that you create a membership login to access reviews. This has numerous implications. Businesses will no longer be able to hide poor reviews from searchers. Since Angie’s List is making reviews and other information accessible to everyone this includes Google spiders. The result may be higher organic rankings for the already high ranking Angie’s List.  Angie’s List still has no API so businesses will need to claim their profile in order so access and be notified of reviews. In becoming a free platform, Angie’s List may expand their company targeting and pursue other industries beyond home improvement. Keep an eye out.

Bing adds quizzes and news to its homepage.
Bing has replaced the “hotspots” that were listed on their homepage with a graduation cap icon. When users click the icon they are given a 3-question quiz. Bing users can earn credits by taking quizzes and share their scores on social sites. The Bing homepage is also used for polling people’s thoughts and opinions on current events and trending topics. This is all part of Bing’s goal of drawing in more users via their homepage. Bing seems to be dipping their toe into what Yahoo had become, less of a search engine and more of a starting base for news and trending topics. Let’s see how far of a transition Bing makes.

Google confirms Keyword Planner glitch and keyword variant combination.
In a follow-up from last week, Google has confirmed a glitch. Some Keyword Planner users had received notices that an active adwords campaign was required in order to access the planner. This is not correct. All you need is an Adwords login. Also, Google began combining search variants within the Keyword Planner making exact match keyword volume unavailable. This makes sense following their decision in 2014 to replace exact match targeting with close variants in Adwords campaigns. The problem however is the lack of consistency in the when variants are combined, which makes the tool even less reliable. The tool has become less valuable for SEO professionals and should be used for trend monitoring rather than reliable metric data.

Google reminds webmasters of the dangers of diluted content.
In a Google hangout, John Mueller provided a gentle reminder that hosting the same content on multiple client domains dilutes its value. If your business model relies on creating duplicate sites for new clients, stop. It is worth investing the time to create unique content for each of your clients.

Google adds language switching feature in India.
Google pushed live a test feature it was running in India. The feature allows searchers to easily flip between English or Hindi search results. I wonder if the feature will be expanded to other languages for other countries, perhaps a Spanish/English flip for specific locations within the U.S.

Google displaying information from tables in search results.
Google has been pulling information from tables on webpages and displaying it in column format below the site meta description in the search results. Google is identifying tables by the HTML (no markup needed). If Google continues to pull data like this, tables may make a comeback, after having been replaced by CSS and scripts. SEO pros, get ready to argue with your developer.

Google testing Google Podium beyond political candidates.
Google Podium (Google Posts) has been found displayed for a local business and now a charter school. Previously, Podium was only displaying shared posts about political candidates. Google Podium is only available to those invited, although you can sign up on the waitlist. For those with a consistently searched brand, who have a strong presence on Google+, signing up for the feature is worthwhile. Podium results remove an extra step for searchers looking to interact with your Google Posts.

Sitemap location does not affect rankings.
John Mueller, in a Google hangout, noted that moving the location of your sitemap has no impact on ranking for better or for worse. If you do move your sitemap, make sure you resubmit it in Google Search Console and Bing Webmaster Tools.

Google adds two new variations to its Shopping Ads landing pages.
First Google has created another filter in the shopping ad (displayed on the right of the search results). The filter allows users to include only products “with Special Offers”. The second, more exciting variation is a landing page that does not include any retailer listings but instead is an expanded version of a product card. The card includes links, reviews, related products, nearby stores… The product page looks very much like what a user would see on an Amazon product page. Google has tested similar variations of these product pages in the past. If they can get expanded product card format experience down, they may be able to take away the UX advantage Amazon has over online shopping.

Google adds new sections within My Account: My Activity, Ads Personilization.
Google has added two new sections within My Account, a My Activity section and an Ads Personalization section. The My Activity section allows users to have an overview of their search and browsing histories. They can delete bits of this history individually or by removing all items associated with a keyword. The Ads Personalization section allows users to check and uncheck the ads they would interested or disinterested in viewing. This is part of Google’s larger initiative to improve the ad experience, especially given the rise in adblocking and other ad avoidance. I don’t see many people using this section, especially since the industry “AdChoices” campaign did so poorly. It seems that consumers want to only deal with advertising they are interested in, but they don’t want to put in the effort to help with the targeting. At the same time, consumers push back against the collection of data that would allow for personalized ads. Since advertising will never stop it seems we are stuck in a Catch 22.

Google Dynamic Search Ads are now more relevant.
Google announced that the Dynamic Search Ads feature in Adwords will be more relevant. While Google is unclear in how exactly they are going to do this they noted that advertisers may see fluctuations in their DSA ads as Google makes the transition. Keep a closer eye on your search terms report over the next few weeks.

Google canceling inactive Adsense accounts.
Google has been canceling Adsense accounts. Many thought there was a bug in Adsense but Google explained that only inactive accounts are being closed. Publishers should receive an email notice regarding their account closure. If your Adsense account is active there is no need to worry.

Amazon Echo adds voice-order for Prime-eligible products.
Amazon Echo has finally added the ability to order any Prime-eligible product that Amazon sells. Previously, users could only reorder items from past purchases. While many product categories are not available for voice purchase this is still a step forward for Echo. Amazon needs to continue to make improvements like these and position itself as the go-to voice assistant (at least for eCommerce) before competitors, like Google, launch their own competing products.

Google Maps for mobile adds multiple stops function.
Google announced that Maps for mobile phones is finally adding the ability to add multiple stops to a trip, something the desktop version has had for a long time. The new feature will first roll out to Android users (who need to update their app) and then expand from there. I have never understood why this feature was missing, especially with such a large amount of app traffic coming from mobile.

Twitter announces new Stickers feature.
Twitter announced a new feature called Stickers, which Twitter describes as “a new, visual spin on the hashtag”. Users can add upload their photos to Twitter and place a digital sticker anywhere in the photo. The stickers are not only fun to use, but each sticker has its own searchable group id. Think of them as a combination of emojis, hashtags and Snapchat filters. Stickers are also searchable. The search capability makes stickers much more attractive to brands which can monitor and engage users interacting with specific stickers. Stickers are only available to small group of users to start off with.

Facebook’s Messenger Platform continues to attract attention.
Facebook’s Messenger Platform launched two months ago and has attracted a lot of attention. The platform was created to allow developers to build bots that can automatically interact with customers. The bots are more than “command-line” chatbots and are instead more featured and app-like. More than 11,000 bots have been launched and 23,000 developers have expressed interest in the Wit.ai bot engine. Because of the attention Facebook has launched a new blog for developers to stay up to date with features being offered. Some of the new features include ratings, quick replies, content and account linking.

Facebook adds two Chrome extensions and a Social Plugin.
The extensions and social plugin button were created to help people improve their sharing and saving experience. Facebook also added a new like button design. No need to worry about your current setup as their social sharing buttons are backwards-compatible.

Facebook creates a Slideshow feature for its iOS app.
Slideshow takes your mobile photos and videos and makes them a short clip which can be customized with themes and music. The Slideshow feature is being placed prominently in the main Facebook app. This move toward video follows with Facebook’s Nicola Mendehson’s prediction that the Facebook feed will be all video in the next 5 years.

Facebook launches a Featured Events list.
Facebook launched a human-curated Featured Events list. 10 cities will be testing the feature where Facebook’s curators will select a few social events in the city that could accept extra foot traffic. The events list will display as an option in the carousel for iOS users and will will act as a weekly digest for extroverts. Currently the featured events list can not be affected with ad buying but perhaps a sponsored list will be displayed in the future.

Snapchat seeing an increase in number of adult users.
Similar to how Facebook grew, Snapchat is seeing a rise in the older demographic. With this increase you can expect marketers to become increasingly more interested in the social platform.

Pinterest rolls out series of educational videos for marketers.
Pinterest has rolled out a series of education videos for marketers, offering a deep dive into Pinterest’s products and how Pinners use Pinterest. These videos include topics like: Why businesses matter on Pinterest, Pinterest products for business and How to make Pins that build awareness. Pinterest is continuing their push to better monetize their website, making it more attractive for marketers. While it may not be the social network for all businesses I am excited for industries like home remodeling to take advantage of Pinterest for business.

Stay informed of the latest search engine optimization, pay-per-click advertising, local search and social media marketing news. I read all of the industry news sites so you don’t have to. Instead get the major SEM news of the past week straight to your inbox.