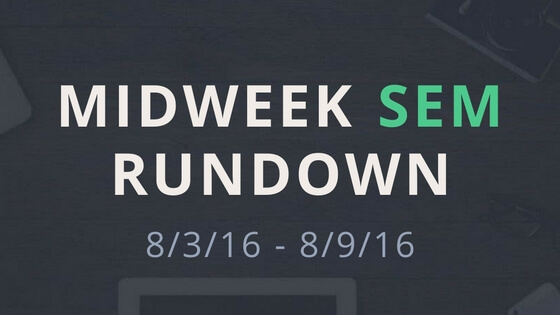 Welcome to the Weekly SEM Rundown, a recap of the past week’s major SEM news.

Google extends alert for Google Search Console bug.
Last week Google made a note in their data anomalies page that traffic in Search Analytics was being erroneously labeled as “Desktop” in the “Devices” grouping category. Google extended the time period, when this bug occurred, to July 29 – Aug 5, 2016.

Google explains impressions, positions & clicks in Search Analytics.
Google posted a new page in their Search Console Help that explains how they calculate impressions, positions and clicks that are reported in the Search Analytics report of Google Search Console. The report is worth reviewing, particularly to understand how Google determines link positions. The diagram below shows how Google orders position. 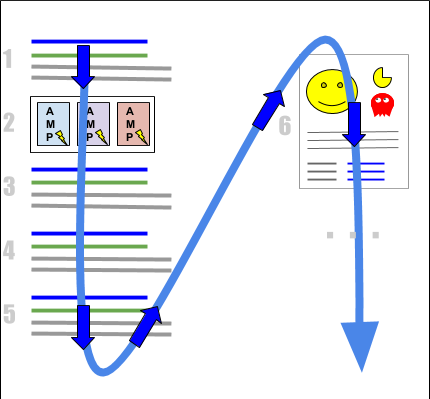 Google runs major update to Gboard.
Google first introduced Gboard in May and have had their first major update since. The update brings a number of improved features which include: Smart GIF suggestions, personalized keyboards, and the addition of the keyboard in French, German, Italian, Portuguese and Spanish. More languages are promised to be coming soon. 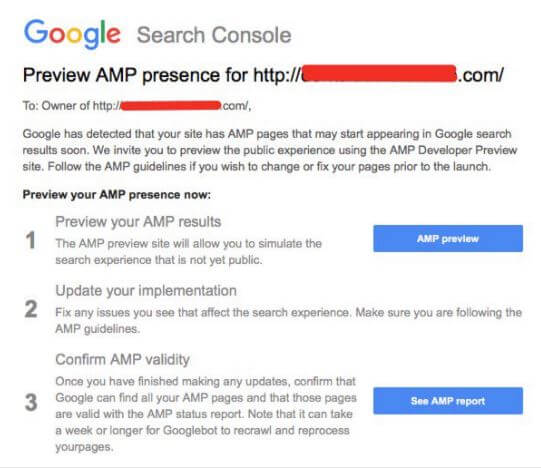 Google changes AMP structured data “errors” to “notes”
Since Google no longer invalidates AMP pages due to data snippets.  They have downgraded “missing structured data” and “invalid structured data” from ‘errors’ to ‘informational notes’. Webmasters may notice a decrease in the reported errors in their Accelerated Mobile Pages report within the Google Search Console. Proper structured data is still required in order to have content displayed in Google’s News Carousel.

HTTPS Ranking Boosts do not vary by industry.
During a Google Hangout John Mueller explained that Google does not vary the boost a site using HTTPS gets based on the industry the site is in. He also noted that the ranking boost is a subtle factor in determining a site’s rankings. Don’t expect to jump from page ten to page one after updating your site’s protocol.

Links from Adult sites not necessarily spammy.
John Mueller tweeted a reminder that backlinks from Adult sites are not automatically considered spam by Google. As long as they are natural, related links that don’t break Google guidelines it is not best practice to remove them from your backlink profile.

Google clarified comment regarding 30x redirects.
Gary Illyes clarified (via tweet) a comment made by John Mueller last week. Mueller had said that there is no dilution of PageRank regardless of the 30x redirect that a webmaster uses. Ilyes added that while the different redirects pass the same PageRank, canonicalization is best preserved through 301 redirects. 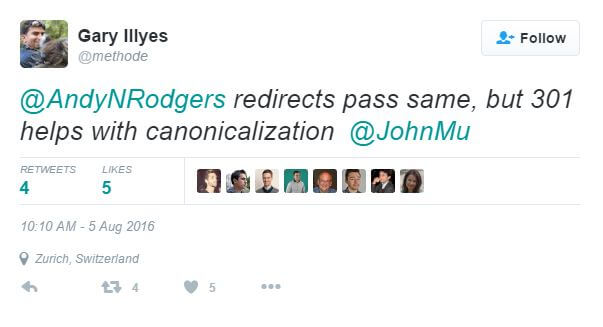 Google Keyword Planner only displaying estimate ranges.
The Adwords Keyword Planner has only been displaying a general range (rather than exact estimate) of traffic estimates for users who do not have a current Adwords campaign. Users and apparently Google are confused if this is a bug or an update to the Keyword Planner policies.

Ads appearing in Google Local Pack.
A couple months ago, Google announced that they would begin to display ads in the local organic three-pack. These ads are now apparently live. Ryan Scollon noted the change on Twitter. 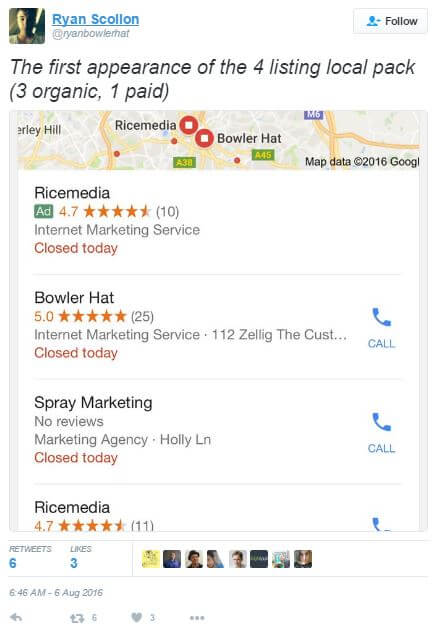 Google My Business Insights adds analytics and drops Google+ source data.
Google added an analytics feature, to Google My Business, that allows webmasters to see how visitors found the google business listing, either from search or maps. Google also displays if a visitor found the listing by searching for the business name or through general web search queries. As part of this update, Google will be removing Google+ statistics from the Dashboard. The update is currently rolling out.

Google Removes Introduction/Description field in Google Maps.
Google removed the ability for webmasters to edit and see the business listing introduction or description on their Google My Business page. However, there is currently a work around where webmaster s can edit the description by using the pencil icon on the top right of their Google profile.

Yelp targeting businesses who threaten legal action against users leaving negative reviews.
Businesses have taken a number of steps to try and prevent negative reviews displaying online. However, lawmakers in the US are reviewing a bill, the Consumer Review Fairness Act, which allows states and the Federal Trade Commission to target businesses that are using legal clauses to gag their customers. Yelp has also taken initiative. They have added a new Consumer Alert that warns users about businesses that use “questionable legal threats” to try and silence unhappy customers. The alert is displayed to users viewing a business profile and must be acknowledged before a user can read a business’ reviews.

Google continuing to test horizontal local one box and now with cards.
Since June, Google has been running tests where they move the local one box from the side of the SERP into an expanded horizontal format that takes up the top of the SERP on desktop. Google has also been testing the horizontal one box with search results being shown as cards. With more people reporting the test, Google may be coming closer to a rollout.

Google My Business Insights Statistics Broken.
Several users, have reported that the insights section within GMB  is not updating past August fifth. Steven Erlich posted about his on Twitter. Hopefully this is a data delay and not a more serious bug.

Google Maps adds two new offline features.
To assist Android users with unreliable services or those who want to save their data, users can turn on a new “Wi-Fi” only feature in their Google Maps settings. This setting allows them to use the app offline. Maps saved for offline mode can be stored in an external SD card so on internal storage is used. When using the features a prompt allows users to select between using their phone or an SD Card to download a map area. Google also increased the number of international ride service listings to compare rates in a number of countries.

Facebook Live tests mid-roll advertising.
Google first released Facebook Live back in December 2015 and has begun testing mid-roll ads in the live news feeds. This is the first time that Facebook has attempted monetizing the feature. 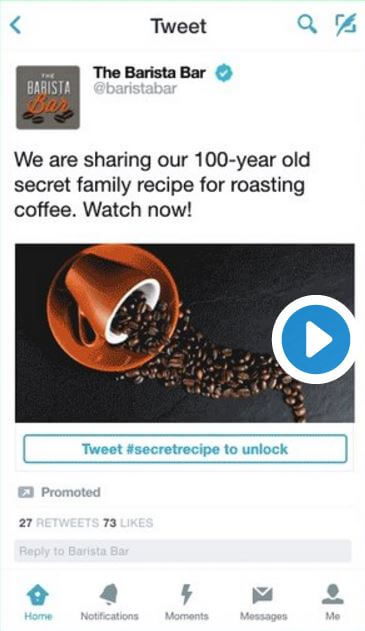 Facebook updates the look of their desktop business pages.
Facebook updated the layout of its business pages. The pages have kept most of the same elements, but rearranged them. Profile pictures have been moved to the top left of the page above the navigation. A new navigation has been added to allow users to easily find the about, videos, photos, posts and events sections. The profile photos will no longer interfere with the cover images. A prominent, blue call-to-action button has been added beneath the cover photo. The new business pages are now also ad free.

LinkedIn brings video to its feed.
LinkedIn will begin to display 30-second videos from LinkedIn Influencers. These videos will be Influencers answering questions related to their areas of expertise. Regular LinkedIn users can only watch videos and comment on them for now. The videos will be viewable in both the news feed as well as on the Influencers’ own display page. Currently selected Influencers are well-known individuals like Bill Gates, Ariana Huffington and Martha Stewart. 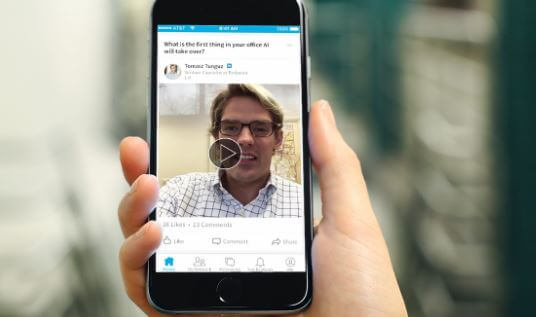 Instagram’s new Stories feature used an algorithm based on Instagram & Facebook engagement.
Instagram has developed an algorithm that determines the order of stories in its new Stories Product. As Instagram is owned by Facebook the new algorithm will pull user engagement data on both Instagram and Facebook. In contrast, Snapchat currently only uses a reverse-chronological order for its stories. The Stories Features is an attempt to make something that is currently unique to Snapchat more commonplace. Facebook has tried to create a Snapchat like feature several times already. Perhaps this time they will get it right.

Snapchat rolls out Geostickers.
Snapchat has rolled out ‘geostickers’ that function like Snapchat geofilters. The stickers are themed to the posters location and can be resized and moved around like a normal sticker. The stickers are available in a number of different locations including: Los Angeles, New York City, San Francisco, Washington DC, Honolulu, London, Sydney, Sao Paulo, Paris and Riyadh.

LinkedIn updates cookie policy to log user interactions.
LinkedIn will now log user interactions for up to 30 days in order to generate usage analytics to be shared in aggregate, de-identified form with advertising customers. No personal information will be shared with advertisers, but users can opt out of off-site and third-party informed advertising in their account settings.

Facebook hopes to combat ad blocking with user control.
Facebook is giving users more control over the ads they see through an “ad preferences” section where they can add and remove interests. While this is a noble attempt, the general ad preference movement a couple years ago failed miserably. Let’s see if Google can get users to set up their ad preferences section.

Influencers on Snapchat star labeling social endorsement as paid ads.
Brands have used Snapchat’s biggest influencers for marketing their products and services. To adhere to the Federal Trade Commission’s (FTC) guidelines these influencers need to make their viewers aware they are watching an ad. However Snapchat’s guidelines on the subject are murky and it is difficult to enforce when posts only last 24 hours. Luckily, a large number of influencers have voluntarily marked their promotions as #ad, letting their viewers know. Hopefully, the practice of transparency continues tp grow.

The NFL gets its own Snapchat Discover Channel.
The NFL signed an extension with Snapchat making it the first sports league with a Snapchat Discover Channel. NFL Media will control news, hot topics, photos and videos produced for their new channel. The hope is that the NFL can engage younger, millennial fans throughout the week with live stories. There will even be customer geofilters for the league’s 32 franchises.

Stay informed of the latest search engine optimization, pay-per-click advertising, local search and social media marketing news. I read all of the industry news sites so you don’t have to. Instead get the major SEM news of the past week straight to your inbox.